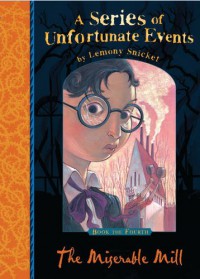 Somehow the next stop in the Baudelaires journey is the Lucky Smells Lumbermill. Lord knows how or why the owner, whose head is always covered by a cloud of cigar smoke, is their next appointed guardian, but he is. The best thing about this book, you have no idea where Olaf is.

Your gut instinct is naturally Foreman Flacutono as his face is always covered, but even then you're not sure. Olaf is a no show and the siblings start to wonder if maybe they really are safe, at least they would do it wasn't for the giant eye shaped building sat across from them. The building looks eerily like Olafs tattoo and stops them from truly letting their guard down. It's not until Klaus has an 'accident' that things become clear that something is amiss. With Klaus acting strangely it's down to his sisters to find out what's really going on.
As before there does seem to be some decent human beings, Phil their co-worker is as optimistic as they get, even after his accident. Charles may have the brains and common sense to know that a lumbermill is no place for children, but it's a shame he doesn't have the balls too. Although he may be in partnership with Mr Lucky Smells himself it's clear who's in charge.
This is great change from the other books, Olaf is nowhere to be seen so you are just as much left in the dark as the children. For me this is where the books really begin I remember the first three really well, most likely because of the film, I feel like I'm properly reliving these books.
Happy reading.
xx
book review lemony snicket A Series Of Unfortunate Events books read books read in 2014 lemony snicket book review lemony snicket the miserable mill the miserable mill book review
Tweet