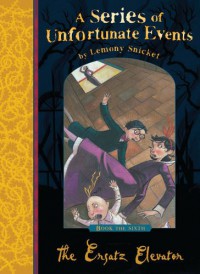 Once again the life of the Baudelaire orphans is put in danger. 667 Dark Avenue is their new home, Esme Squalor, the city's sixth most important financial advisor don't you know, and her husband Jerome are their new guardians. Living in the penthouse apartment that seems to defy the laws of any rational architect, a 71 bedroom apartment, the Baudelaires seem to have found themselves in a decent home.

Esme is all about what is in and what is out, the only reason the children didn't end up with the couple who knew their parents was due to the fact that orphans were out and now their in. Jerome seems genuinely happy to take the three of them in, of course like any adults in this series they all have faults. In Esmes case she is utterly self absorbed and only cares about being the most fashionable, whilst Jerome on the other hand doesn't really care, anything for an easy life. But although he is kind natured he has his own traits that make him just as useless as any other adult. He hates to argue. Which means Esme always gets her way, even if it means going to restaurants that serve food he doesn't like, climbing the stairs to the penthouse because elevators are out or when Olaf makes his inevitable return.

For me what has made this series so far enjoyable is that Olaf doesn't have to be there all the time. Plus with the addition of the Quagmire triplets the story has shifted focus onto helping Duncan and Isadora, for me this is best move Snicket could make. These books have the potential to get boring real quick but he's given the reader something new to read, whilst Olaf and his money grabbing plans are still the main plot there is a new driving force behind the series which means it isn't the same old story: orphans get relocated and Olaf follows. The same story over and over.

The change in direction with this book came at the right time, there is only so many times you can keep having the same plot. We've hit the turning point in the books and the real truth is beginning to emerge.